Fewer than 100 children in the UK are diagnosed each year with neuroblastoma. Most children who get this cancer are younger than five years old. Neuroblastoma is the second most common solid tumour in childhood, and it makes up 8% of the total number of children’s cancers. –Macmillan

Little Kaitlyn was recently  diagnosed with Neuroblastoma; a form of cancer that affects specialised nerve cells. Kaitlyn is 3 years old and had been limping for a while. Her parents constantly took her to the GP who dismissed the child as she appeared to be active and normal. Kaitlyn’s father gives an account on her health.

“I noticed one evening that each time Kayla was got up to walk she was limping, I asked her what was the matter, and she told me her leg was hurting.

However from about 3-4 weeks before Kayla has had a high temperature.
We were at home and I notice that her temperature was very high so I gave her some medication.

Planning to go to church in the morning, something said to me why are you going church, you should take the baby to the hospital. So on the Saturday morning we got dressed, I packed a bag with lunch and I took her to North Middlesex. I told the doctors that this was not my child, she is always laughing, chatting and having fun, but lately I noticed that she had not been herself.

A paediatric doctor looked her over and said she seemed fine and maybe she is just having the temperature from the change in the weather. I told them this could not be, because she had been limping and also complaining that her left knee had been hurting.

They took a second look and confirmed that there is something wrong but they did not know at that moment what it was.

The doctors decided the only way they will know is if they took blood samples and analysed them.
The results were alarming, they found out that her red blood cells were very low and she was extremely anaemic. I called her mother to inform her immediately.

We spent the next three days at North Middlesex as the doctors carried out various tests. On the Tuesday the doctors told us that Kaitlyn had cancer and they need to transfer her to Great Ormond Street hospital. More tests were done and it was confirmed that Kaitlyn had Neuroblastoma cancer which had spread to her head and knees, and the major part was in her stomach.
As I father I just could not understand how this could happen to my child. Kayla had a lump in her head, and the doctors were not concerned about that.
However on the 18/11/2014 her mother recognised that Kayla was not moving her arm and her eyes seem unfocused, Kayla was rushed into emergency surgery as the MRI scan revealed that the cancerous lump in her in head was bleeding and affecting her brain function.

The surgeons told her that she may not make it and her heart may stop because this was going to be a major surgery and for a little baby she may not come out of it.
However six hours after, Kayla was up and telling the doctors and nurses that they should not touch her and that she was hungry, this could only be because of the many prayers that went up and the Lord heard our cry.

A Hickman line and a feeding tube had been placed inside her body to administer the medication that she needed to recover. She had her first course of chemotherapy last  Friday 21st November, which went well.

Today Kayla is doing well. However, there are good days and bad days; days when she doesn’t want to talk or eat, and days when she can’t stop eating. She has a long way to go in terms of recovery, but she is a fighter and I know that God is watching over her daily, and He is the one keeping her alive and safe.
My sincere gratitude to everyone who knows and those who don’t know Kayla but though others have come to know her, I thank you for your prayers and petition to God the most High, for keeping her alive.

Thanks and much love Navado”

Kaitlyn’s mum contacted MK Kids Interiors asking me to do something nice in Kaitlyn’s room. I was touched by the whole situation so I volunteered to design, a new room for their princess. Here is the initial wish list. I say initial, because I got the chance to speak with Kaitlyn after her surgery , She told me her favourite colours were, pink, purple and green. She also said she wants balloons in her room. I will keep you updated on the progress of the room. 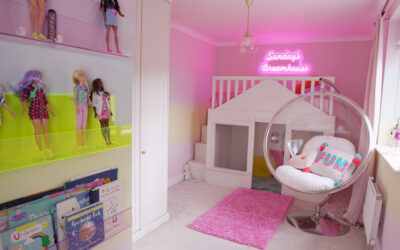 Barbie Dreamhouse Inspired Bedroom for Celebrity Ferne McCann Initial impressions when walking into this room was that the space could be maximised. The room was a blank canvas with potential. The Brief: "This year Barbie has a new Dreamhouse, and to create awareness...

Our Founder Medina King wins the first ever Herman Miller Design and Innovation award for the Power list Black Excellence Awards 2021. Medina was nominated for her "clear vision and dedication to design for children". Medina graduated from the University of the Arts -...

Our soft play balls used Atom for Biogen's exhibition. Our soft play ball pool balls have been super popular over the summer holidays and have been traveling the world. Atom contacted us for a solution to a game they were designing and making. We sent them over 1000...